I Leggo My Pleco 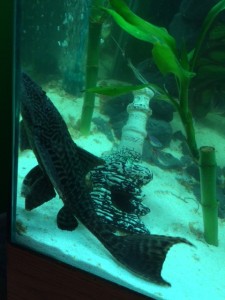 The gorgeous, graceful pleco was creating a hazard in my fish tank. I didn’t even know I had a problem until four guppies died on the same day. One water test later I was armed with a plan that involved weeks of water changes and the sad realization that I had to find a different home for mister pleco. Like cows emitting methane and thus contributing to climate change, the pleco’s poop had pumped the nitrates in the aquarium to an apocalyptic level.

This experience got me to thinking about the purchase, and sale, of pets.

Before you buy a pet

I bought “blind” when I started my first tank. For example, are fish territorial? They don’t all mix well. That shark I thought would be so cool to have? Like a great-looking pair of shoes that don’t fit, he was not so cool when he terrorized the other fish, chasing them practically to death. I also would not have picked the pleco to keep the tank clean. He quickly grew from 2 inches to 10 and became a lethal fecal factory.

Where I buy my fish and supplies, the people are incredibly knowledgeable and keep a variety of tanks themselves. They are part of a community of responsible fishkeepers and helped find someone to take my offending pleco. He’ll live out his days in a closed pond and won’t enter the waterways as an invasive species.

Find a seller that honors your purchase, refunding or replacing it when something goes wrong. A lot of retail stores get a bad rap. Whether or not they deserve that depends on where they get the pets they sell and how they treat them, and you. Stay away from the bad players and don’t hesitate to tell others about them.